Medical Supplements for the over 65 market 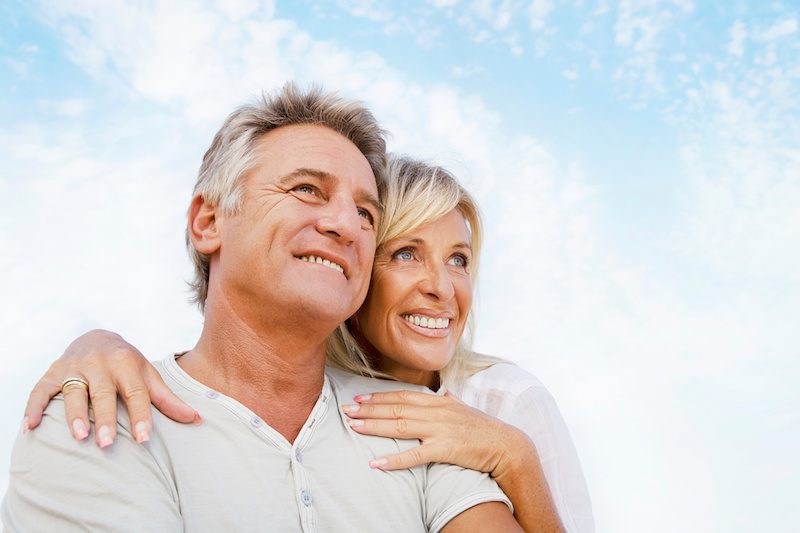 Let’s start off with the basics – what, exactly, is Medicare? Put simply, Medicare is a government-run health insurance program for people over the age of 65, people receiving Social Security Disability payments, and people with End Stage Renal Disease (kidney failure requiring dialysis).

Medicare was signed into law back in 1965 and was originally created for older Americans who had trouble qualifying for insurance at the time. Over the years, Medicare has been modified on a number of occasions. In 1972, for instance, it was expanded to include the disabled and people with ESRD. In 1997, President Clinton signed the Balanced Budget Act, which created the Medicare + Choice program (now called Medicare Advantage). In 2003, President Bush signed the Medicare Drug, Improvement, and Modernization Act, which created the Medicare Part D drug program and expanded funding for Medicare Advantage. And the Affordable Care Act, signed into law in 2010 by President Obama, added a number of new preventive services to the program and began to close the unpopular Part D donut hole.

While many lawmakers believe Medicare needs some serious improvements, others would like to expand the program to include those age 55 and older or even to cover all Americans. The government program does have a high approval rating among those who receive Medicare benefits.

There are two parts to original Medicare: Part A and Part B. One is paid for through payroll deductions during your working years; the other is paid for when you sign up for Medicare benefits.

Medicare Part A is known as “hospital coverage,” though it actually helps pay for a number of different services:

There are various deductibles and copayments required when people use Medicare Part A, including a big up-front deductible for hospitalization and daily charges after 60 days.

Most people over age 65 qualify for “premium free” Medicare Part A. That’s because they’ve contributed to the program through payroll deductions for at least 40 quarters, the equivalent of 10 years, or they are married to someone who has. Those who did not contribute to the program for the required amount of time must pay a monthly fee when they sign up.

Interestingly, after age 65 Medicare Part A is mandatory for anyone receiving social security. In other words, you can’t postpone or opt out of Part A without also forfeiting your social security payments. There was even a court case challenging this requirement, but the judge ruled against the plaintiffs.

Medicare Part B is known as “Medical Insurance” and covers a number of services, including:

Unlike Medicare Part A, which people pay for during their working years, Medicare Part B is paid for when you actually start receiving the benefits. For 2017, the standard Medicare Part B premium is $134, but it can be more or less than this amount. Most people already receiving Medicare Part B prior to 2017 and paying for it through a deduction from their social security checks, for instance, pay $109 per month. People with higher incomes, though, pay significantly more for Medicare Part B. The below chart from Medicare.gov shows the income adjustments to the Part B premiums.

For Medicare Part B, there’s an annual deductible to meet, and then people pay 20% of the Medicare allowed amount with no stop-loss protection.

We’ve already mentioned some of the “holes” in the Medicare Part A and Part B coverage, but there are actually several other gaps that can require beneficiaries to spend a lot of money out of pocket when they do need medical care. Here’s a quick summary of the Medicare cost-sharing requirements: 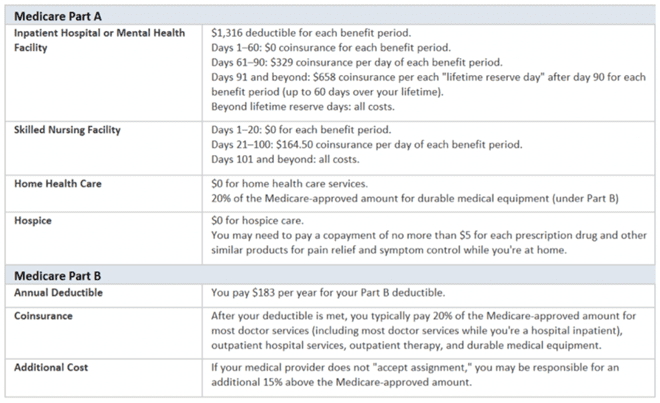 Looking at the holes in Medicare Parts A and B, it’s pretty clear that many people may need some additional protection. To help fill the gaps in Medicare, some people purchase a Medicare Supplement, also known as a Medigap policy. Medicare supplements pay secondary to Medicare and cover some of the out-of-pocket expenses after Medicare has paid its share.

When someone with a Medicare supplement receives medical services, she presents both her red, white, and blue Medicare card and her Medicare supplement card. The provider will bill Medicare, which will pay its portion of the bill. Afterwards, the supplement will pay the portion that it is responsible for. In some cases, Medicare will even notify the insurance company so that the provider does not have to.

There are 10 standardized Medicare supplement policies, each designated by a different letter. Different supplements fill different holes in the Medicare coverage, but a plan from one company will fill the same holes as a plan with the same letter from another company. The standardization makes it easy to compare policies from one insurance company to another. Instead of reading the fine print and looking for hard-to-find differences in the benefits, agents and their clients can focus on the premium, rate history, and financial ratings of the plans when making a decision.

The below chart shows the various Medigap options and what expenses they cover. 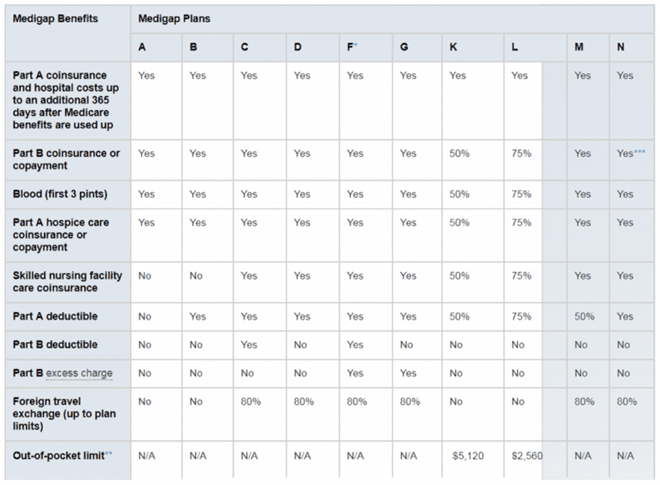 If you live in Massachusetts, Minnesota, or Wisconsin, Medigap policies are standardized in a different way.

* Plan F also offers a high-deductible plan. If you choose this option, this means you must pay for Medicare-covered costs up to the deductible amount of $2,200 in 2017 before your Medigap plan pays anything.

** After you meet your out-of-pocket yearly limit and your yearly Part B deductible, the Medigap plan pays 100% of covered services for the rest of the calendar year.

*** Plan N pays 100% of the Part B coinsurance, except for a copayment of up to $20 for some office visits and up to a $50 copayment for emergency room visits that don’t result in inpatient admission.

For the first six months after a beneficiary starts receiving Medicare Part B, he or she cannot be turned down based on medical conditions, so clearly this is the best time to sign up for a Medigap plan. After that six-month window, insurers can underwrite the policies and can decline coverage based on pre-existing conditions.

What you may have noticed is that neither original Medicare (Parts A and B) nor any of the standardized Medigap policies cover prescription drugs. That’s because, until fairly recently, the Medicare program did not pay for medications outside of the hospital. Think about that for a second—the population that has the highest number of chronic conditions and therefore the greatest need for medication did not have coverage for prescription drugs under their health program until 2006. Before that time, some seniors living on a fixed income often had to make the difficult choices in spending if they needed medications. Clearly, they needed some help. That’s why, in December of 2003, President Bush signed the Medicare Modernization Act and created the Medicare Part D drug program.

Under Medicare Part D, people get help paying for the medications they need. In most parts of the country, there are a number of plans to choose from, each with different drug formularies, required copayments, and monthly plan premiums. Many require the member to pay an annual deductible before the drug coverage kicks in, and almost all have a “coverage gap,” sometimes referred to as a donut hole, after the total drug costs exceed a certain amount. The coverage gap has gotten smaller as a result of the Affordable Care Act, but it’s still something that many seniors fear.

The interesting thing about the Medicare Part D program is that the government doesn’t actually offer any of the available drug plans; instead, they’re offered by private insurance companies. This unique approach has led to more options for consumers, and the competition has helped to keep premiums down.

Medicare Part D can be offered as a stand-alone plan to pair with original Medicare (and a supplement) or can be incorporated into a Medicare Advantage plan, discussed below.

Medicare supplements are great. They fill many of the holes in an individual’s Medicare coverage, giving them financial peace of mind, and they allow beneficiaries to visit any provider that accepts Medicare. Unfortunately, though, not everyone can afford a Medicare supplement. That’s where a Medicare Advantage (MA) plan can help.

Medicare Advantage plans look a lot more like the insurance sold in the individual and group markets. There are several different types of plans, including HMOs and PPOs, and most have copayments for lower-cost services, deductibles and coinsurance for higher-cost services, and an out-of-pocket maximum that limits the member’s financial exposure. Most also have contracted provider networks and offer the best benefits when members visit in-network providers.

One type of Medicare Advantage plan, called Private Fee for Service (PFFS), does not contract with providers but instead pays a pre-determined amount for covered services. Providers do not have to treat patients with this type of coverage, so it’s important for members to talk with their providers ahead of time to make sure they’re willing to treat them and accept the plan’s payment terms.

There’s no underwriting on a Medicare Advantage plan. As long as the Medicare beneficiary has both parts A and B, lives in the plan’s service area, and does not have End Stage Renal Disease, he or she qualifies for an Advantage plan. These plans also have a much lower monthly premiums than a Medicare supplement, sometimes with no additional cost beyond the Medicare Part B premium. The downside is that the out- of-pocket exposure is usually a little higher than with a supplement, and Medicare Advantage plans come with network restrictions that supplements do not.

That brings us to the Annual Election Period, or AEP, which runs from October 15 to December 7. This is the time of the year when people can join, switch, or cancel their Medicare Advantage and Medicare Part D plans. Agents who sell these products spend weeks preparing for the craziness, completing the various training and certification programs required by their states and the carriers they represent.

To get more information on Medicare and get prices on Medicare supplements and Part D Prescription coverage please call Elaine Saccente at:  704-891-2274 elaine@signupforhealth.com.